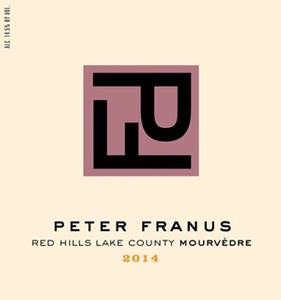 Mourvèdre. There’s nothing quite like it, and if you’re looking for a different wine experience, here it is!

The inspiration began many years ago with Brandlin Vineyard—home to my flagship Zinfandel, as well as a handful of Mourvèdre vines, or as they referred to it in the old days, “Mataro.” Over the years I produced two vintages from Brandlin, and they became some of my most sought after wines. Enter Red Hills Lake County, a site I always thought had much in common with Mount Veeder, at an even higher elevation. A tiny crop—too small to bottle on its own--in 2012 made us optimistic.

For those not all that familiar with variety, Mourvèdre is widely planted in Spain—thought to have originated there in fact—as well as in southern France. Unless planted in the proper areas it can be prolific, hard, and not terribly appealing. When planted in the right location, it is magically transformed.

Fore Family Vineyard is a spectacular property, situated at 3000 feet elevation. Soils are thin in the Red Hills and drain instantly. The elevation places vines well above the hot summer heat trapped in the valleys below, and aligns them in the path of cool westerly Pacific breezes. At the same time, there is paradoxically greater solar intensity that has some inexplicable effect on the grapes. Because of the high elevation, the differential between day and night time temperatures is dramatic, resulting in intensely flavored grapes.

2018 was a fantastic growing season. Beautiful spring conditions followed abundant winter rainfall, resulting in even fruit set. We couldn’t have asked for more ideal summer and fall weather--moderate temperatures throughout. The only two things that put me slightly on edge during harvest is anticipating hot temperature spikes or rain. Neither occurred resulting in long hang time, beautiful and balanced fruit that we could pick at our leisure. Harvest began roughly 10 – 14 days later than the previous vintages.

The 2018 Mourvèdre is unique, sultry, and exotic. Dark ruby in color, it offers floral, elusive, and perfumed aromas of pink peppercorn, wild raspberry, anise, lavender and cardamom. Ripe cherry flavors explode on entry with a velvety and balanced mouth-feel supported by a lively structure. A long and refreshing finish.

If you are looking for something a bit out of the ordinary with a personality all its own, here it is!